From the junction of US 64, US 276, and NC 280 in Brevard, drive 3.5 miles east on US 64 and turn right on Crab Creek Road (SR 1528). Go 4.2 miles and turn right on DuPont Road (SR 1259), which becomes Staton Road when it crosses from Henderson County into Transylvania County. Drive 4 miles to High Falls Access, on the left. You’ll pass by Hooker Falls Access on the way.

In the second edition of teh North Carolina Waterfalls book, I gave directions to Bridal Veil Falls from Fawn Lake Access, off Reasonover Road. This was because the old road providing the easiest access was not open to the public. That road is open now, so these directions utilize it. You can still reach the falls from Fawn Lake Access, and it’s actually a little shorter that way, but the easiest route is the one I describe.

Follow Buck Forest Road beyond the gate. After about 0.5 mile, you’ll reach the covered bridge over the Little River. Look downstream to see the brink of High Falls. In another 100 yards, turn right on Conservation Road. Follow the road for about 1.2 miles and turn right on Bridal Veil Falls Road. Go less than 0.5 mile to the traffic circle. A wide path continues from the circle and reaches the base of the falls in about 0.15 mile.

Bridal Veil Falls has captivated me ever since I saw Jim Bob Tinsley’s photo in The Land of Waterfalls. Then, a few years later when I watched The Last of the Mohicans and saw Hawkeye and gang running alongside it, I was really enthralled. So it’s no surprise that I wasted little time coming here after the falls became part of DuPont State Recreational Forest.

The waterfall starts as a short, overhanging drop you can actually get behind, then goes on a long, gentle, sliding run before fanning out and falling over a steep, sloping rockface. Although other North Carolina waterfalls share some of Bridal Veil’s characteristics, few can compare with it. If there were a way to see all of the waterfall from one vantage point (Tinsley shot from the top of a tree), and if a high-power transmission line weren’t clearly visible at the top, I’d give it a higher beauty rating. The photo rating is based on exploring all the vantage points of the falls, not just the view from the base.

A sign at the base warns visitors to stay on the marked trail, but the trail ends at the base of the falls. Although a makeshift path climbs the river-right side to the upper drop, you can’t see much from it. I know forest officials frown on climbing on the waterfall, but you’ll see hordes of people all over the falls on weekends and most any day during summer and fall. Exercise extreme caution here. The gentle slope in the middle of the falls can engender carelessness, and if you slip at the wrong place you’re in serious trouble. As one official said, some algae-rich areas here make Teflon seem like flypaper. Even the flat areas can be difficult. On one trip, I watched several bicyclists bust their butts as they walked their bikes across the flat area at the base of the upper drop. I even saw some attempting to ride their bikes across—attempt being an apt description.

I had read that the behind-the-waterfall scene in The Last of the Mohicans was filmed at Bridal Veil Falls, but I questioned the truth of that story. Thanks to Richard Federici’s On the Trail of The Last of the Mohicans, I now know the truth. The movie does include scenes of the characters appearing to walk behind the falls. But the dialogue scene behind the falls was filmed in a makeshift studio set up in an Asheville warehouse.

In The Hunger Games, Katniss jumps into the pool at the base of Bridal Veil Falls after her leg is burned. That’s another movie scene that seems suspect, as there isn’t much water in that pool at most times. But leave it to Hollywood to devise a solution. The film crew pumped water into the pool to make it deep enough. After Katniss jumps out of the pool and flees the other tributes, a brief glimpse of Bridal Veil Falls is visible in the background. 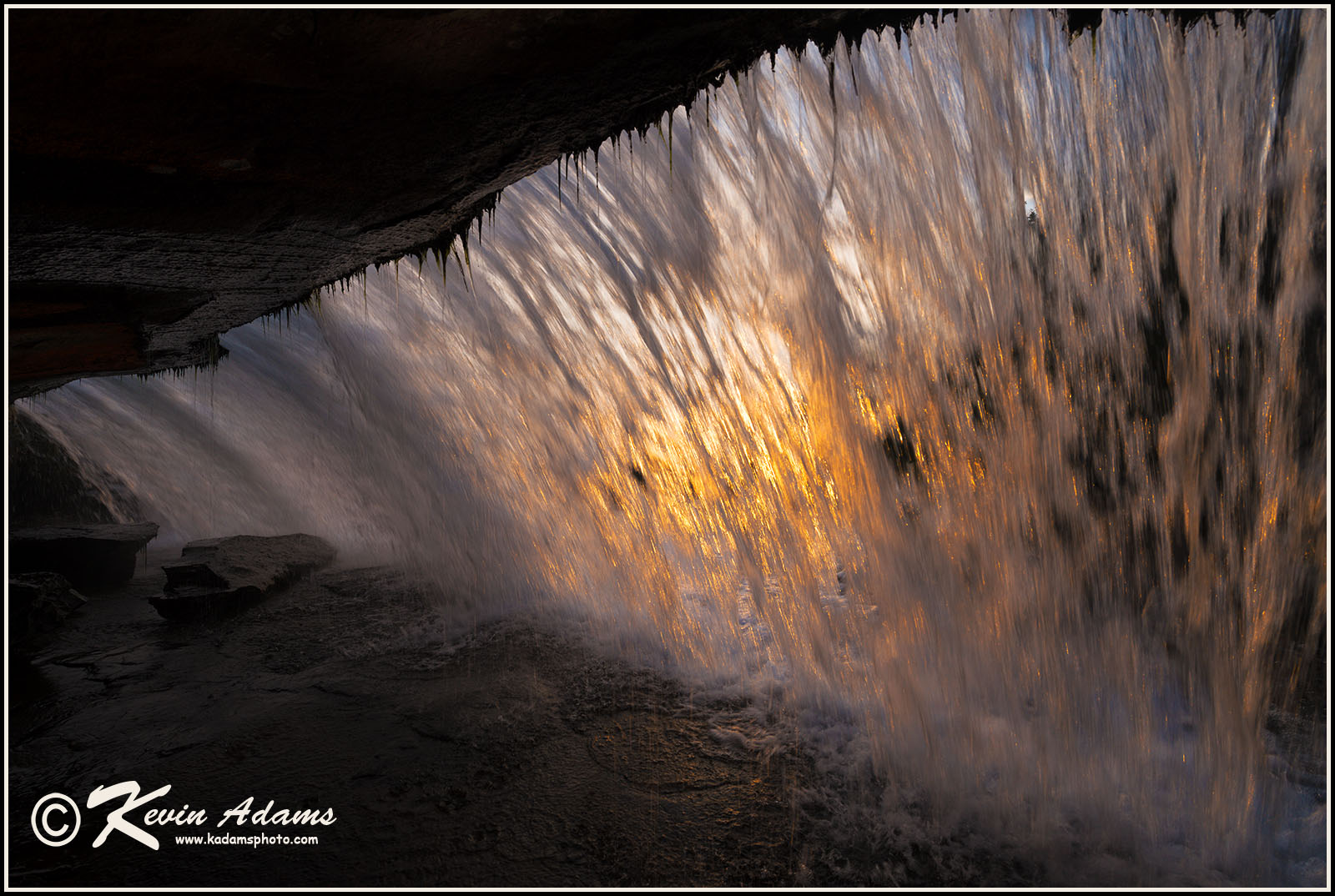 Shot 40 exposures and stacked them to create the star trails. Light painted the waterfall with a flashlight.

To create the fire effect, I stuffed a kitchen wisk with steel wool, set it on fire, and twirled it over my head during the exposure.

To create the fire effect, I stuffed a kitchen wisk with steel wool, set it on fire, and twirled it over my head during the exposure. 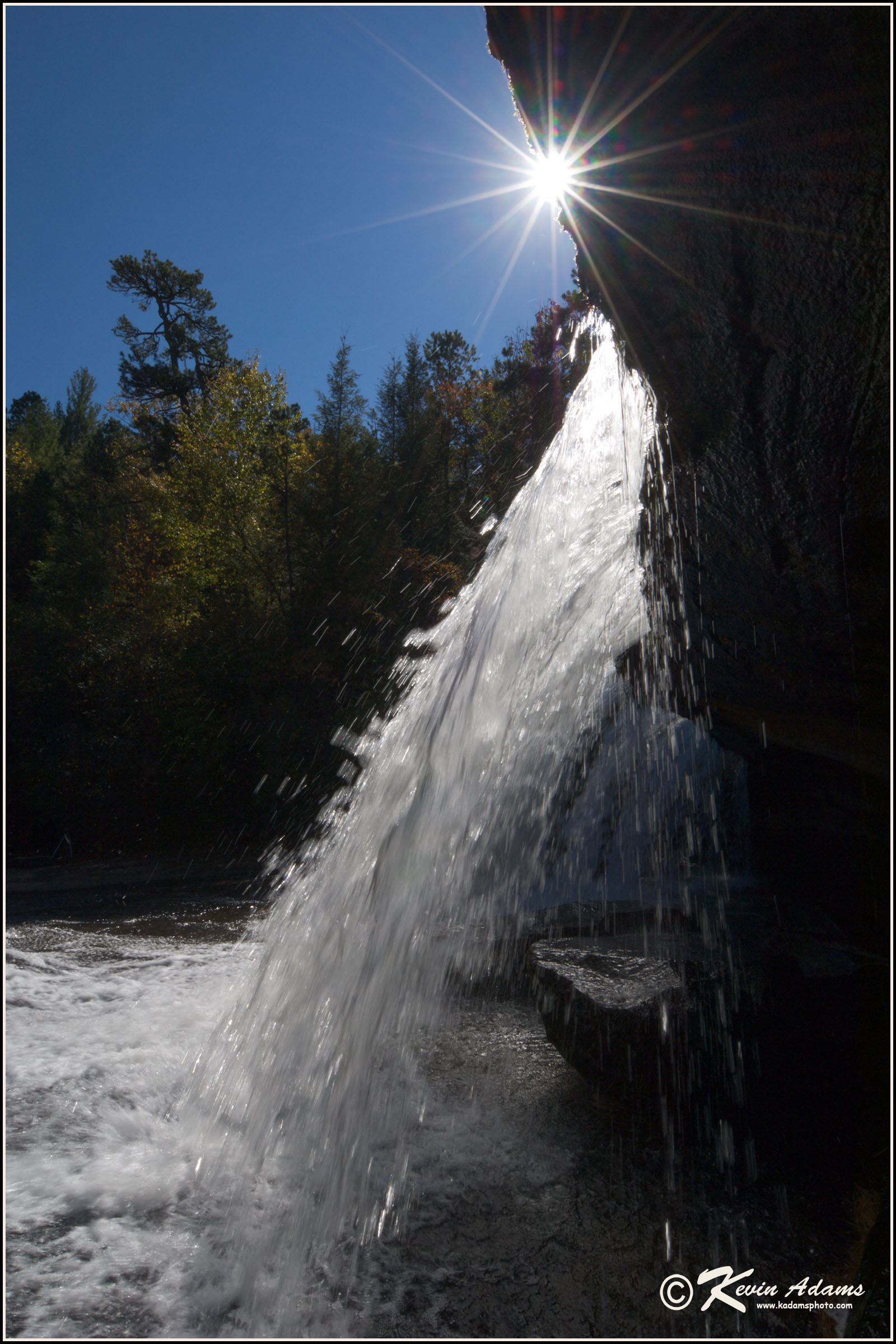